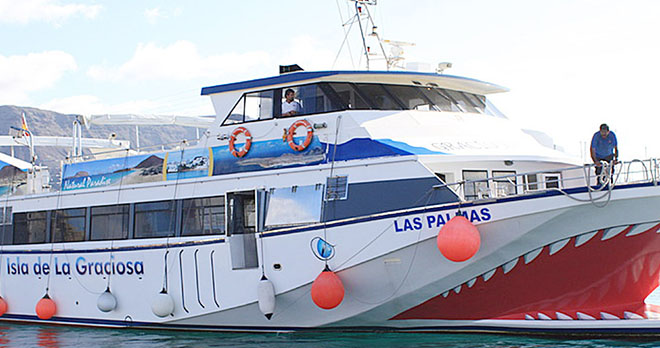 Linea Romero’s ferries are back up and running and on the road, or sea should we say and from mid October with a new vessel added to the fleet.
Líneas Romero is a family owned company founded in 1930 by Jorge M. Toledo. It was established as the first maritime postal company that connected La Graciosa Island with Lanzarote, in the Canarian archipelago.
At first, it was a simple boat of oars that transported the mail between these two beautiful islands of the Atlantic near the African coast. The postal business was inherited by the daughter of Jorge M. Toledo, Juana González Toledo, who then married Juan Romero.
In 1970, Juan Romero took the management of the company and changed its name, expanding the services offered. In 1985 the four children inherited the business: Luis, Juan Jorge, Federico and Rosa Romero, who are currently in charge of the company. The Romero family still lives in La Graciosa and, although their business has not stopped growing, their values remain intact. They love their work and their island above all else and their passion has led them to success.
As from the middle of October, a new, larger vessel joins the fleet and will hold 400 passengers. All of Linea Romero’s ferries have the latest technology and all have free WiFi on board.