Comet Visible from Lanzarote Over The Weekend 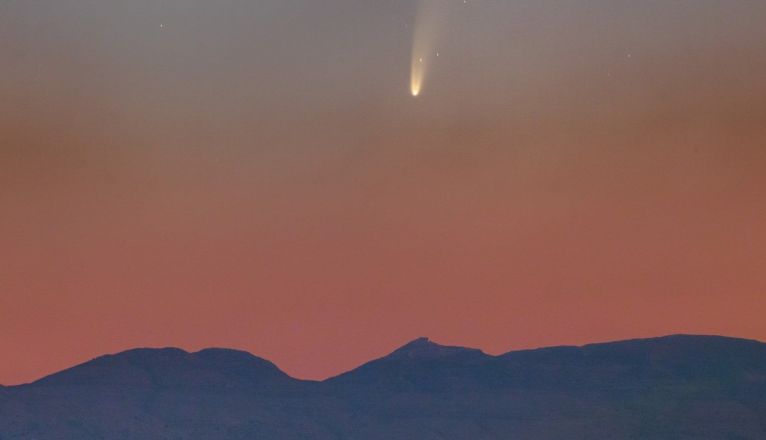 Astronomy fans will be in for a real treat over the weekend as the brightest comet for over the last decade will be visible with the naked eye. In May a fragmentation occured on the Atlas comet which has contributed to its visibility. On March 27 a new object orbiting the sun with the characteristics of a comet, showing a condensed central nucleus and a tail was discovered by the Neowise telescope and named Comet C / 2020 F3 Neowise. Since then, observations of the comet have made it possible to determine its orbit with precision,as it moves in the opposite direction to the planets and making a complete orbit of the sun 3,000 years. Best visibty wil be on 3rd  July where it will be just 0.29 Astronomical Units from the earthwhich is approximately 150 million kilometer. Its glow reaching temperatures close to 600 degrees Celsius.
How to observe it
The best days to observe the NEOWISE comet with the naked eye from Lanzarote (weather permitting) will be next Friday, July 10 and Saturday, July 11, where it will be possible to see it before sunrise, starting at 5.45 local time. At that time the comet will be in the northeast above the horizon at a very low altitude, almost close to the ground, only 3º high, but it will increase in altitude in the following minutes until it reaches about 12º at 6.30 am, when Despite continuing to gain height, it will begin to “fade” from the effect of sunlight at dawn.
Starting on July 14, the comet can be seen at dusk, but with less brightness than it will present these days, so its observation with the naked eye will become more difficult but it will become an easy target within the reach of the little ones. amateur telescopes.