Camel Rides Re Open After Lock Down 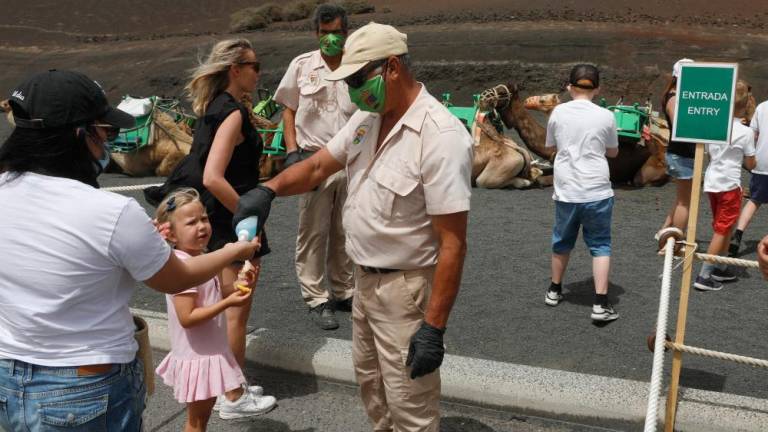 The camels in Uga are back and the rides for tourists have been reintroduced after the lock down in Lanzarote. The camel shepherds have been given guidelines to operate safely with extensive sanitary security measures. During the lock down the shepherds were forced to take care of the animals with no income and the hope that the day would come when they could return. July 1st  was that long awaited date and finaly they were able to open the camel rides up the side of the mountain close to Timanfaya National Park. The numbers have been low due to the lack of tourists on the island and camel drivers had to settle for carrying just 14 people. Luckily during this week the numbers have doubled as some services are already being provided to operators who organize tourist excursions. Although the numbers are starting to grow it is expected that they will be far short of normal for a normal summer season as the fight against the pandemic continues. The camel train normally has a has a capacity of 180 people at a time. During the first part of the year before lock down 130 animals were being used to walk alongside beautiful landscape of Timanfaya.
In accordance to the new restrictions a single point of entry has now been introduced with an exit area 12 meters away enabling tourists to socialy distance. The shepherds wear masks and are generous with hydroalcoholic gel, which is also offered to clients. There are also strict separation measures in place for the area dedicated to the parking of cars and buses.

The Timanfaya National Park Board of Trustees are also to approve a revision of the tariffs. Two people can ride on the back of a camel, on any day of the week between 9.00 and 16.00, for 12 euros. The camel drivers hope to gradually increase the rates and reach a goal of 18 euros. This will be the first review since the rides began