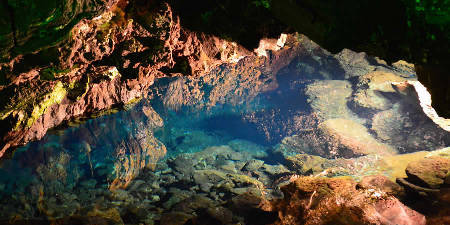 Lanzarote has plenty of hidden secrets. Just when you think you have discovered every corner of the island, you learn about another part that can sometimes open up another world and change your perception about everything you have seen before. Anyone visiting will hear about the caves in the north of Lanzarote, mainly because they have been developed into tourist centres, but in reality the island is full of hidden natural caves. A few miles from the villa of El Golfo in the southwest of the island, there’s an old fishermans path that leads to Playa del Paso. It’s here you can find the cave of Covon also known as La Chiletera. Its another volcanic tube created by the eruptions of 1730 to 1736. There are 2 points of access, one which is located towards the the coast and the other about 700 meters away in a lava field.  It has  a very high ceiling, and like neighboring Cueva del Paso or El Esqueleto, it has access through the mountains and access to the sea from a cliff. Its name Chifletera comes from the noise which is made when wave violently hit the formations around this area looking for vents.