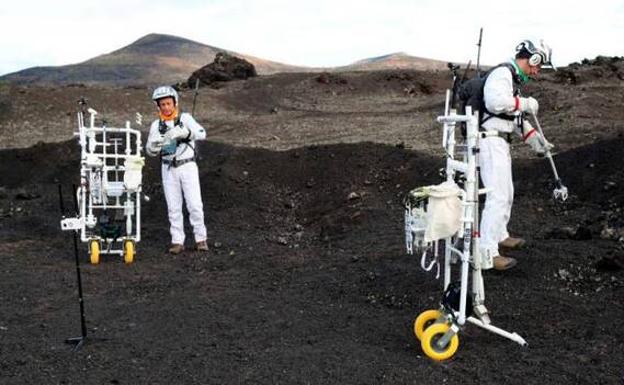 Lanzarote will once again host ESA (European Space Agency) astronauts who will train for the fifth year in the volcanic areas. Various engineers and geologists will accompany cosmonauts Alexander Gerst and Stephanie Wilson during November. The exercise should serve to give continuity to research carried out in the past year, as well as during the autumns of 2016, 2017 and 2018.The work will be carried out by ESA astronauts Alexander Gerst and NASA cosmonaut Stephanie Wilson. The island is perfect for training as the basaltic lava flows resemble the extensive plains of the lunar seas that exist in some areas on Mars. The team are expected to learn about the geological interactions between volcanic activity and water, two key factors in the search for life. In previous ESA experiences on Lanzarote soil, cosmonauts Matthias Maurer, Luca Parmitano, Sergei Kud-Sverchkov, Thomas Reiter and Samantha Cristoforetti were involved. Pedro Duque was also here, in 2016 and 2018. Last year, with Francesco Sauro and Loredana Bessona as director, the activity was led by Kate Rubins (NASA) and Andreas Mogensen.