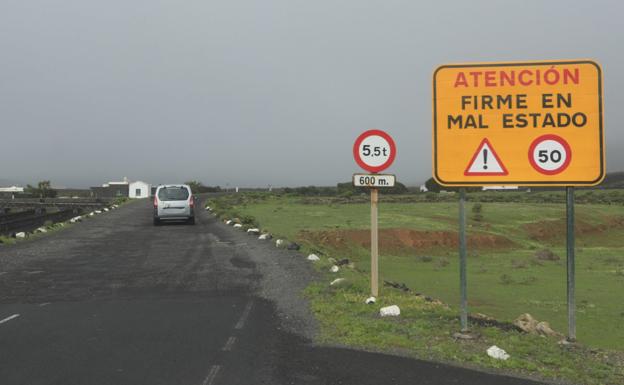 There are a number of roads that have suffered a fair degree of neglect over the years. Its fair to say that a plan to rehabiltate some of these highways is well overdue. The government recognises that now is the time to move forward and as a result have decided to use their own funds to make an investmant of over 24 million euros. An intial approval has allready taken place on Friday 29th January. There is plenty to do and some of the improvements are as follows
1. Improvement of the LZ-409 highway, which connects Mozaga with El Peñón and which has an investment of 1.2 million euros. 2. LZ-408 road (Nazaret-Vuelta Ajay), for almost 3.7 million euros
3.LZ-58 road (Masdache-La Vegueta), the proposal with the highest forecast, since an investment of close to 10.7 million euros is expected.
4.The Mácher roundabouts (Los Olivos road), Tiagua and LZ-30, for just over 1.5 million euros
5.The resurfacing of the southern highway LZ-701, between Yaiza and Playa Blanca, for 2.5 million euros
6.New lighting on the LZ-2, between Arrecife and Playa Honda, for more than 560,000 euros
7.The repair of slopes and walls in various sections of the LZ-207, the Tabayesco highway, for about 576,000 euros
8.The resurfacing of the LZ-14 highway, which connects Los Mármoles with Las Caletas, for more than 120,000 euros
9.The resurfacing of the LZ-30, for 2.28 million euros.
10.990,000 euros for the resurfacing of the LZ-10 in the section that connects Tahíche with Teguise.
Also it is expected that 3.1 million euros will also be provided as a direct subsidy to the Cabildo by the Government of the Canary Islands, with a view to the execution of four further improvements
1. general improvements on the urban crossing of the LZ-1 highway, passing through Tahíche, including the presence of security measures for the adaptation of cycle lanes.
2.1.2 million euros for the beautification of the access to the airport, for 770,000 euros.
3.The adaptation of the containment systems in the neuralgic road LZ-2, between Arrecife and Playa Blanca, for almost 975,000 euros
4.The improvement of the connection of the San Bartolomé-Arrecife highway with the ring road of the capital, for 210,000 euros.